Last night I blogged about my hike to the viewpoint looking at the waterfall, Trou de Fer.  I assumed the waterfall was called Trou de Fer, but it appears I am sorely mistaken.  In fact, the waterfall falls into the Trou de Fer, or Iron Hole as it is translated.   This picture from the French Wikipedia is quite breathtaking. 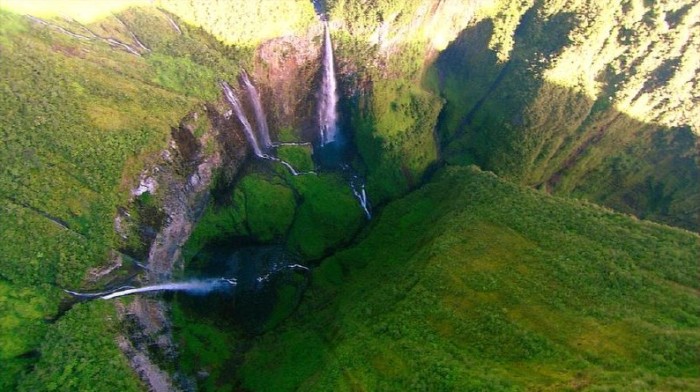 Some interesting tidbits from the English version of the Wikipedia, found here, are that nobody had ever climbed down and swam into the hole until 1989.   Apparently it’s also a popular helicopter tour, where they fly right down into the canyon above the hole.

Reunion has so much to to offer its tourists.  From culture, incredible French-Creole food, waterfalls, hiking, and beaches.  I’m pretty sure the only reason that most Americans don’t know about it is because its all the way around the world, next to Madagascar.   I know I had never heard of it before arriving.  The only challenge about being here for non-Francophones is English is a rare commodity.   Especially compared to islands like Mauritius or even Rodrigues, which are more Anglophone-friendly.   But, even with that limitation, the people are nice and accomodating here.  I have been walking every night through Le Port, and have never once felt uneasy, and I’ve been told I’m walking through the worst neighborhood in town!

Here’s a great video I found highlighting some of the water aspects on this island.

If you have more questions about things to do and see in Reunion, don’t hesitate to comment or ask.  And as always, don’t forget to follow the site so you’re sure to get updates as they come.  Explore the world, my friends.  There is so much to see and experience!

One thought on “More information about Trou de Fer”