We arrived in St Helena this morning after the last couple days of the rolling ship from hell.   It wasn’t a rough sea, per se, it was just constant rolling that after a while caused your muscles to all ache and scream for the rolling to stop!   Well, that’s over for now.  To be continued, I’m sure, as we carry on to Ascension in a week.

But for now we are in St Helena.   Arriving at St Helena after being at sea for 9-10 days was quite awesome.  Large majestic rock comes straight down and into the water.    It almost looked obsidian-like in the morning light, but of course it wasn’t.    We were asked to moor on these mooring pucks, metal floating puck-like objects that were anchored, and were probably 46-60 inches across and 16 inches thick, with a ring in the middle of them.    We attached the lines to the forward cleats and then brought the lines back to port side of the boat where I was going to step off of the boat, stand on the puck, and feed the lines through the ring.   The pucks were not very stable, and I felt like I might fall off into the water, but somehow we were able to get the lines through the ring and get me back on the boat without getting wet.   Then we had to manhandle the lines back up towards the front of the boat where we could cinch them in and tie them off.

Next we called the water taxi to bring us into town.  The ocean is kind of rough getting a dingy into the dock, so most people elect to call a water taxi, which charges 2 British pounds per person, round trip.  It was nice, but it only runs hourly and only up until 6pm.   So if we want to do anything later in the evening, we’ll have to take our dingy in and hope that the swells aren’t too violent getting on the dock.   There was a family we met, who were from St Helena, who had just completed their circumnavigation (wife was from New Zealand, which I’m sure had a lot to do with why they went (those New Zealand women love to sail!)) with their 3 kids, who bring their dingy in every day, trying to save some money, and they had it all down to a science. 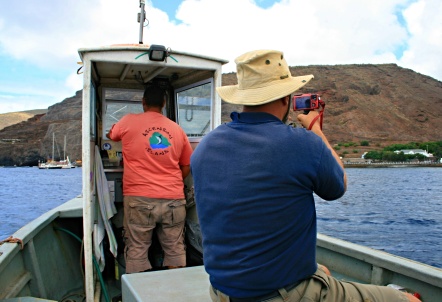 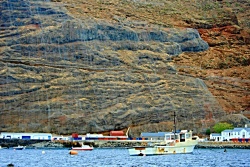 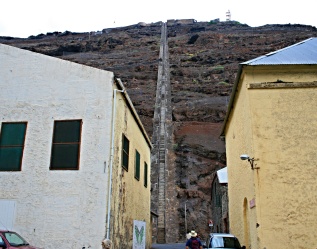 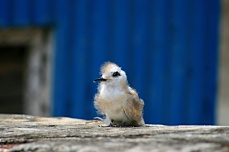 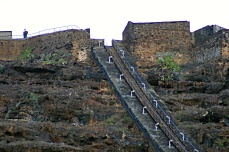 We walked around to Customs, Port Authority, and Immigration and got everything taken care of.  This country requires a 20 Pound check in fee, and proof of medical evacuation health insurance.  Luckily, I have DAN’s Gaurdian Plan, which covers me for SCUBA Diving as well as Medical Evac if I need it.   However, I didn’t have proof of it on my phone, so I had to go find some internet so I could login to DAN’s website and save a picture of my Medical Card on my phone that proved I had it.   Internet here costs 3.30 Britsh Pounds per 30 minutes and is so-so.   I’m not sure how I’m going to get everything I need to get done tomorrow to upload these posts, pictures and videos.   It’s going to require some serious planning to make sure I use my time efficiently.  None of this checking Facebook for hours and surfing the internet for things.  Upload, Post, Reply to emails and Facebook Messenger and other Social Media, done!    Internet Rodeo!

After completing our check-in procedures, we went to a local hotel for some early dinner, which was delicious, but a lot more expensive that what we’ve been used to in S Africa and Namibia.  We’ve been spoiled by the cost of food in Southern Africa.   We got back to the dock in time for the 6 pm water taxi and got back on the boat.   It’s now 8:20 and everybody is passed out in bed already.    We’ll be here in St Helena through the weekend, then head north to Ascension.  Tomorrow we are hiking the stairs of death, photographed in my collection above.

One thing I have noticed about St Helena is the variety of ethnic diversity here.   We have traveled from Darwin to here over the past year and I saw people here from almost every one of the countries we visited.   There were so many darker-skinned people here that it almost felt to me like there must be an indigenous group that were here before, especially considering that this is a British province (or something similar).   But I was reassured by several people I talked to that the diversity comes from hundreds of years of workers and slaves and British Indian occupation.   They basically told me that most of the people that migrated here are from the Indian Ocean, which made a lot of sense based on what I mentioned above.   Also, the language spoken here is English, but I have noticed a strong local dialect that is spoken on the street and confirmed that there is such a thing.  They call it broken English, but it is really more of a pidgeon.  I also want to say that the diversity seen here is not new, as we have seen it in many of the countries we’ve visited over the past year.  Reunion, Rodriguez, Mauritius, Madagascar, South Africa, Namibia, they are all quite diverse.    Beautiful places, beautiful people.

There is a marine biology group here attending a whale shark symposium. There are lots of whale sharks here, apparently. We were scheduled to go to a whale shark snorkel today, but it was posponed until Thursday because the swells are too big. Hopefully things will be better on Thursday morning. If so, hopefully we’ll be able to get enough internet to upload pics before we leave.

Also captured above is a picture of a baby fairy tern. Adorable bird. So ugly, it’s cute. You know, like a pug! 🙂