Yesterday morning we decided to go to Nosy Komba, partly because our friends from Brick House were going and we were easily taunted by the promise of more lemurs! We had a lazy morning and got around to taking off at 9 or 10 am and about an hour later we arrived at the anchorage area and dropped anchor. The water looked inviting to me so I decided to take a dip and look around to see what I could see. The water wasn’t very clear but it was only about 20-30 feet deep, so I started diving down to investigate. I dove down the anchor once and noticed we had dropped our anchor right next to a coral reef and probably should have suggested we pull up anchor then and move somewhere else, but unfortunately I didn’t. More to come later regarding this.

We communicated with Brick House and we all dinghied into the island and found a place to put them since there was no dinghy dock. Luckily we found the restaurant we had heard of and put our dinghies in the sand next to Chez Yolande. Great food, similar prices to other places we’ve eaten, but for me probably the best grilled chicken I’ve had since arriving in Madagascar. We met a few girls who were working there on a conservation project and talked to them a little about the island and how to find the lemurs. After lunch we decided to set off and find them

There are no roads on Nosy Komba, but there are footpaths everywhere. While walking through the village there really wasn’t an easy way to tell whether you were going the right way or not. Small dirt pathways went throughout the village, but there were no signs or anything to direct us where we wanted to go. We finally decided to ask for directions after we ran into beach. We got directed to a foot path that took us to a more permanent type of foot path with rocks lining and paving the path and souvenir shops all along the way. We had heard there was a ticket office somewhere, but because we there on a Sunday afternoon, we either missed it or it wasn’t running. Here are a few pictures of the village we walked through: 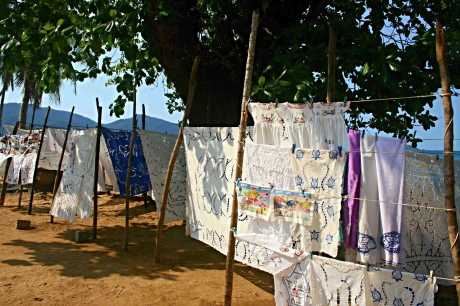 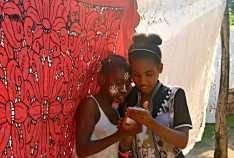 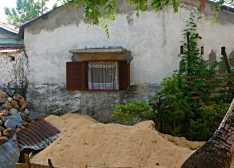 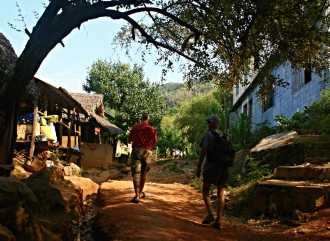 After about a mile of walking we came across a souvenir shop that had about 5 or 6 lemurs hanging out above it and they started calling to them to come down and eat the bananas we had brought for the occasion. “Maki, maki, maki!” Oh wow, do lemurs love bananas! It’s really the one thing they seem to crave more than anything else in the world. We started taking turns holding bananas or bits of bananas and standing in the path of where the lemurs had to go to get to them. Basically our bodies became the highway they needed to cross, allowing them to get to their coveted snack. Here are some pictures of this undertaking. 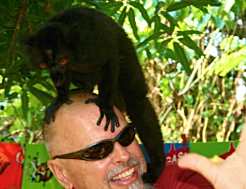 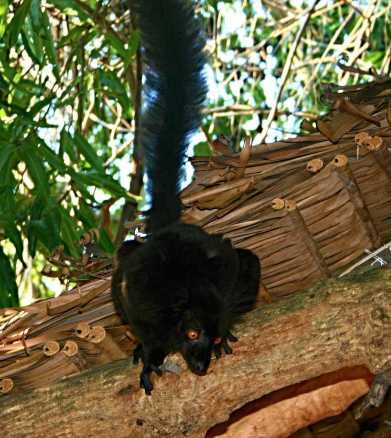 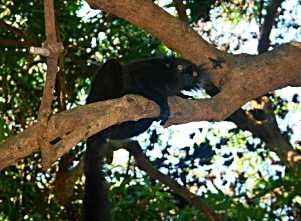 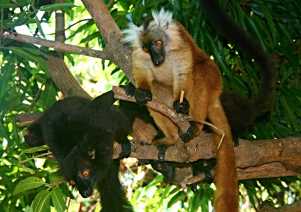 Once we ran out of bananas we ended up walking up the side of the mountain for another 1/2 mile in hopes of finding a greater trove of lemurs. We did find a bunch of them in a mango tree, but no longer had bananas to taunt them down for pictures. Brian found a banana tree with a few ripe bananas on it and as soon as he arrived and we started yelling, “Maki, maki, maki,” they all started working their way down the branches and stayed down until the bananas were gone. Shortly after this we walked back down the trail and back into the town.

It was a fun Sunday afternoon hike and lemur hunt and I would do it again in a heartbeat.

The next morning (today) we decided to go back to the main island, Nosy Be, and see about getting some more diesel and other provisions. However, when we went to pull up the anchor, we found it had become wrapped around the coral head, which honestly made my heart sink. Brian attempted to get it unwrapped with the boat, but was unable to. I grabbed my snorkel gear and went down and found the best way to get us unstuck, which required a fair bit of freediving down, manipulating the chain, to get it unravelled and then I could direct Brian the way to go so we could get the rest of it unstuck from the coral head and allow us to get our anchor back up with as little damage as possible to the coral. As a diver this didn’t make me very happy, but sometimes you just have to do what you have to do. Next time something like this happens and I realize we are next to a coral head, I will suggest we immediately pull up anchor and move to a new spot.